Through my years of development I have always strived to be an honest developer. I want my users to have a good experience. I want to build fun, new, exciting, polished apps. And I want to play by the rules…

But not everybody plays by the rules.

When I released Spot Animals a few months back I was very disappointed that I could not even find my app in the store by name.  Or by any other combination of search terms, no matter how much I scrolled down.  Trust me, after lots of development, nothing is worse.  Here’s me searching for it by name. 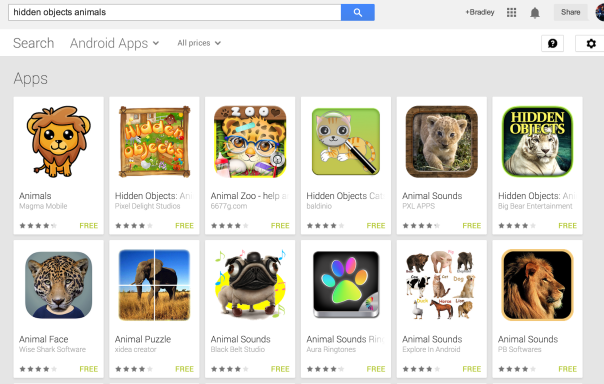 While searching for my app I came across a variety of other apps that were high in the ranks, but seemingly poorly built. I was on a quest to figure out why.  Admittedly, many of the apps were generally high quality, and had a lot of downloads to help them keep their high ranking.  After searching for a while I came across this app:

Now, I’m not going say whether this app deserves its ranking or not, I didn’t download or play it. But as I was scouring their reviews I found a really disconcerting trend.  Let’s see how fast you can see the trend… 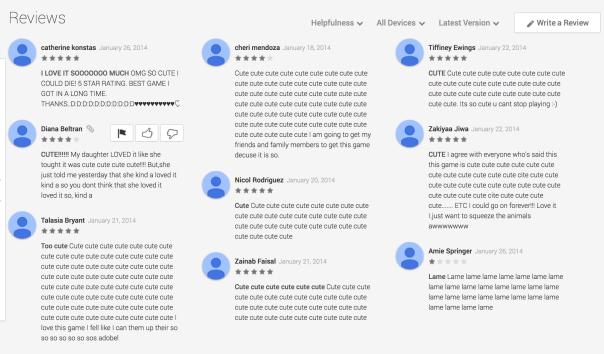 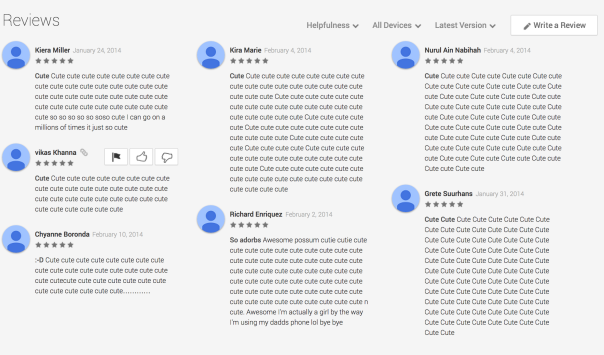 I think I can sum up all the above with “Cute cute cute cute cute”. I found page after page of ratings that had exactly the same rating… some number of Cute’s and a high 4 or 5-star rating.

Now it is possible that there are simply a ton of people that just find this app unbearably cute.  But more than likely these were purchased reviews.  Almost none of the reviewers have thumbnails, and they all look awfully similar.  The chances of this being the case sounds particularly low to me.  This really got me wondering… How many apps simply cheat their way to the top?

I’m not certain how many apps do this, but I assume it must be a lot. Since my apps are on the store I am required to provide a public facing email that users can contact me at. Sadly, about half of emails I get are advertisements. And of those there are two main categories. The first are advertising networks:  Our ads will make you way more money! But a close second is: We’ll get you more ratings/downloads.  Here is an example of one such email: 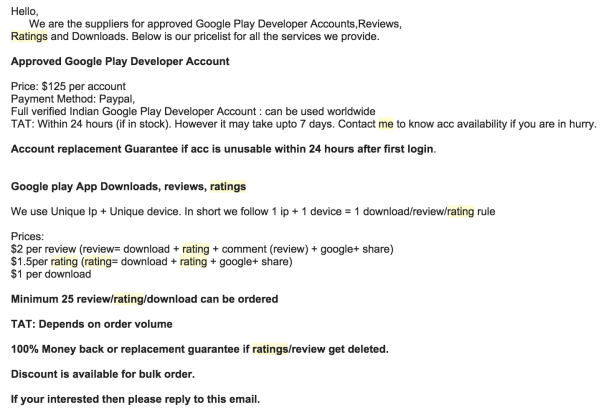 Now, I’m not sure how well Google is able to crack down on this, but it actually sounds like an incredible difficult thing to do.  It is a short step from encouraging 100 of your friends to download your app, to paying a 100 of your friends to download and rate it 5-stars.  How does Google distinguish the difference between the two without seeing the money transfer?  I’m not really sure they can.

So if I’m receiving this many requests there must merit behind it.  Which makes me believe the number of apps using this method of deception isn’t small.

So is it tempting to use this with my apps?  Of course!  There’s always that desire boost ones downloads and ratings, who wouldn’t want that?  And there’s always the question of: “If I get the ball rolling, how big could it become?”.

But I got into app development because it is fun.  And I refuse to let the illusion of grandeur dissuade me from doing what I love, and doing it in a way is honest and true to my values.  And of course the fear of getting my apps kicked off the store is always there too.

Anyway, I’m curious if anyone else has seen this kind of trend elsewhere, and what other developers feel about it.  Is there anything honest apps can do to combat it?

Note: Since it has been months since I originally released “Spot!”.  I wondered how it fares now.  The good news is, it is showing up just fine in the rankings, and interestingly enough the other app isn’t in that list anymore.  Who knows the magic behind the store ranking, but one thing is for sure, just because you have a certain rank (or don’t) doesn’t guarantee you’ll stay there.

While redesigning my app Goofy Glass, I came across this interesting finding.  Android isn’t left-hand friendly!  Now I’m not left-handed,...

Copy Cat: A Game for Working Parents with Kids

Imagine a rough morning where you wake up early to get to work.  Your family is still asleep, and you...