My Son's Hair is Green

Yesterday, as I walked down the street I looked at my son Logan and thought to myself: “Wow, he has such bright  green hair, it really shows up well in the sunlight.”  By now, you may be thinking I am joking.  Or perhaps I played a cruel joke on my son and dyed his hair color to celebrate St. Patrick’s day.  But, I promise this isn’t a joke.   His hair looked the same way it always does, and you can see it in the picture below: 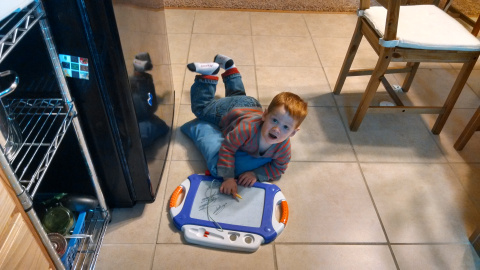 By now you probably have realized that something is wrong with me.  In fact you may be hoping, deep down inside, that I’ve gone a little bit insane.  Which, let’s face it, could make for an interesting blog article to read.  But the truth is I experience something fairly unique I am colorblind.  When people find out I am colorblind they are generally really interested in what I see, how colorblind I am, and of course (the most important) how I manage to stop at stop signs.  But before I can get into those nitty gritty details, we need to learn a little bit about colorblindness.

How common is colorblindness?

From wikipedia, we get some pretty interesting stats.

We instantly see one obvious things.  First, men are much more likely to be colorblind than women, this is due to the genetic tie colorblindness has to the ‘X’ chromosome.  Since women have two, their other ‘X’ chromosome can beat up the first and make it stay quiet.  (Although I would like to note that women still can be colorblind!  For some reason they think they are immune.  So, men, even though you are 22 times more likely to be incorrect, feel free to continue questioning their judgement.)

Next, you may be asking yourself what all these different types mean.  And more importantly how it actually affects a person’s vision.  I’ll try to break it down for you.  First there are two types of doodads in your eye.  You have cones and rods.  For our purposes cones are the only things that matter, as they are what determine color.  You were blessed with 3 different kinds of cones.  These are often referred to as the L, M, and S cones.  (For long, medium, and short, referring the wavelength it reacts to).  You may also hear people refer to these as Red, Green, and Blue.  Although that isn’t entirely accurate as you can see in the graph below.

And here’s another one by the Physics Classroom.

Now you’ll notice there’s some overlap.  That overlap is super important.  You see without that overlap the brain can’t resolve certain colors…  Here’s an example, the color ‘Yellow’ hits your eye.  Your 3 cones tell your brain about their responses.  The Blue sends back 0%.  The green sends back 70%, and the Red sends back 98%.  Your brain knows that specific combination makes yellow.

But now imagine you were stuck with only 2 cones, green and blue.  When the response comes in saying 0% blue, and 70% green.  Now the brain has a harder time determining which side of the curve it is on.  In a bright room, it will probably be okay.  In a dark room it may get 0% blue for both colors, making it hard to tell what side of the curve it is on.  Without the red cone’s extra information, those colors make look the ‘same’.  Remove the blue cone too and you would never be able to tell the difference between the two sides of the curve.

This is why trying to figure out what a colorblind person sees is so difficult.  This is why you may often hear people say colorblindness is more like a ‘confusion of colors’.  And why they may claim they can see all the colors, yet after that claim they still dress in a bizarre fashion, and say the wrong names for colors that really aren’t that close.

That alone is difficult enough.  Now add in the fact that different cones missing mean different things.  And also that a cone doesn’t just need to be missing to cause problems…  If a cone is simply shifted or defective it may have some of the same effects, but perhaps not as severe.

But understanding this goes a long way to understanding the different types of colorblindness.  So let’s take a look at those stats once again, but I’ve changed the titles out to be a little more clear:

It is also clear now what some of the differences between missing various cones are:

All Red-Green : Struggles in the red-yellow-green portion of the spectrum.  If the cone is missing it is worse.  If it is shifted it could be bad or not.

Missing red:  Deep reds end up looking like black, since you’ve got no cone on the far right to pick those up.

Missing green:  Purples end up looking like blue, since you’ve got nothing on the far left to help distinguish the colors.

But, here’s where it gets even more crazy.  The brain uses more than just the eyes to fill in details.  The brain’s ultimate goal is to be correct, (it is fairly obsessive compulsive about giving you the right answer).  It doesn’t just stop at one source, it checks a bunch other sources as well to make sure the information it gives you is correct.  One of the things it uses is your bank of knowledge.

Knowing all of the above, I thoroughly believe I am missing my green cone.  I’m part of the 1% who not only has a defective green, but it is outright missing.  I really can’t tell the difference between blues and purples, and I’ve always struggled with reds and greens.  I can (for the most part) hide the fact that I am, because my brain fills in all the details and I don’t really think twice about it.

But knowing how my eyes work, and knowing that Logan’s shade of hair is right among one of those colors my brain can’t resolve correct, sometimes I misguide my brain a bit.  If I stare at my son’s hair enough and convince myself it is green, I can actually see it as green.  You may think I’m crazy, but my eyes don’t have enough information, and my brain is being given misinformation.  It is a really cool experience.

Yesterday, was simply the first time it happened without me trying.

Anyway, if you’re interested in seeing what life is like through my eyes, check out my Android app:

My work recently awarded me a t-shirt, it is a little tradition at HireVue that when somebody does has a...

As we get closer to Colorblind Awareness day (also known as St. Patrick's Day), I wanted to share a variety...